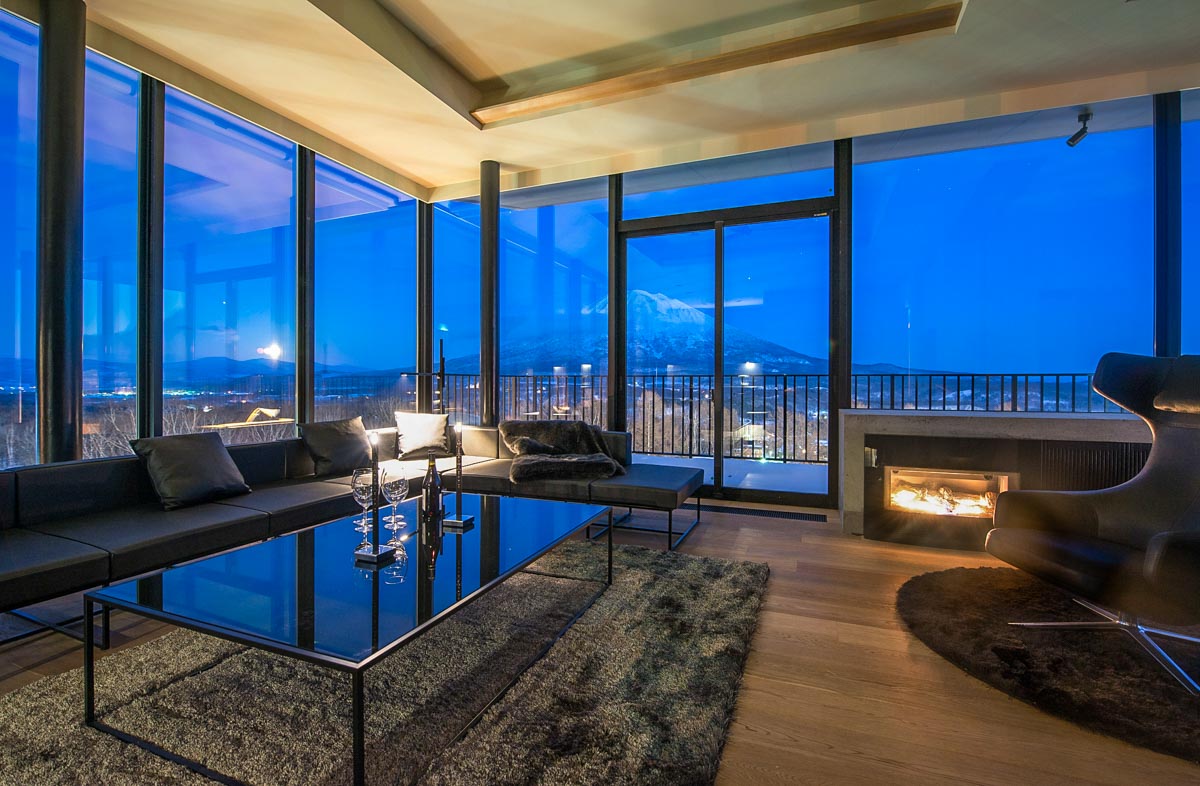 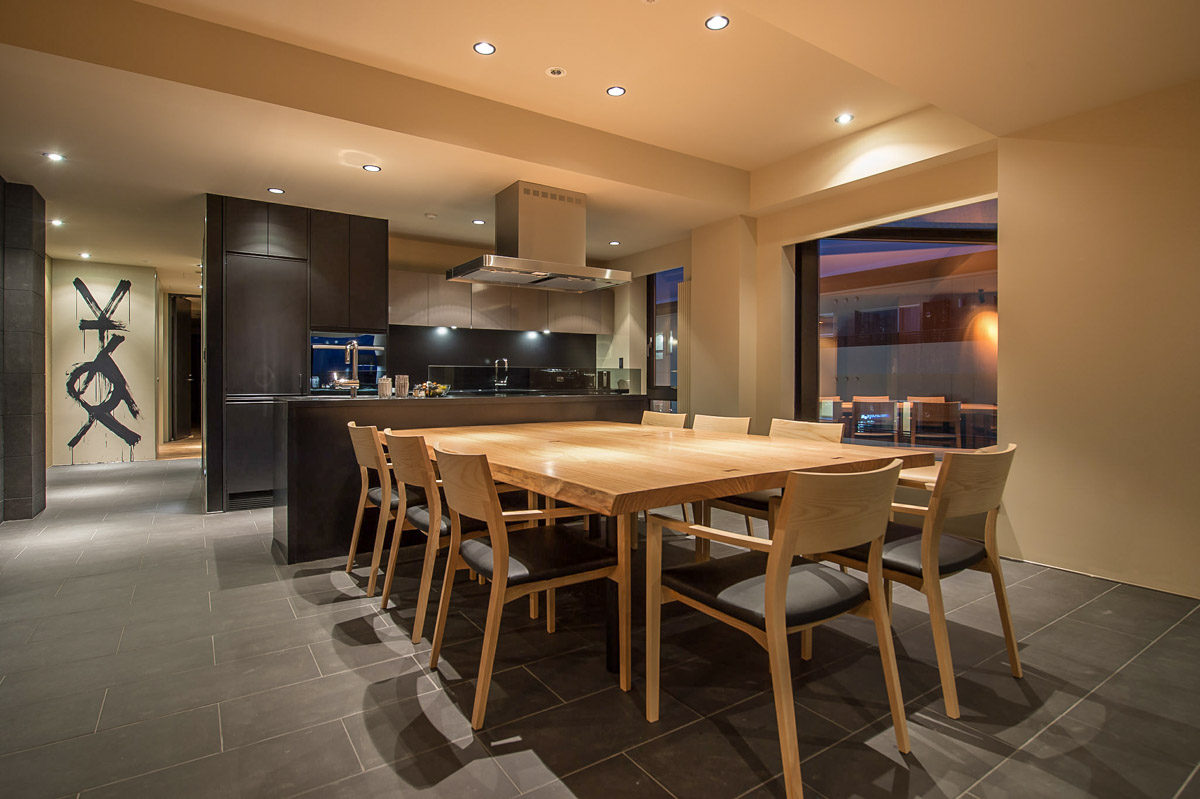 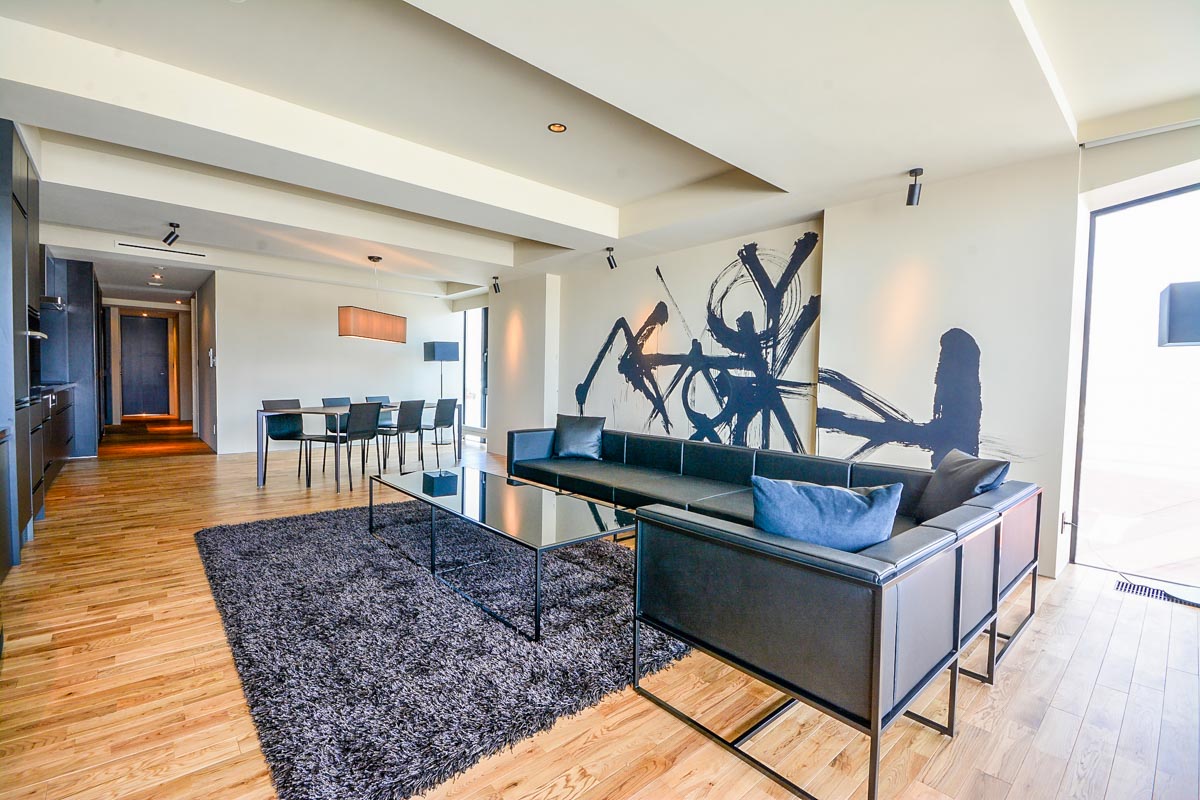 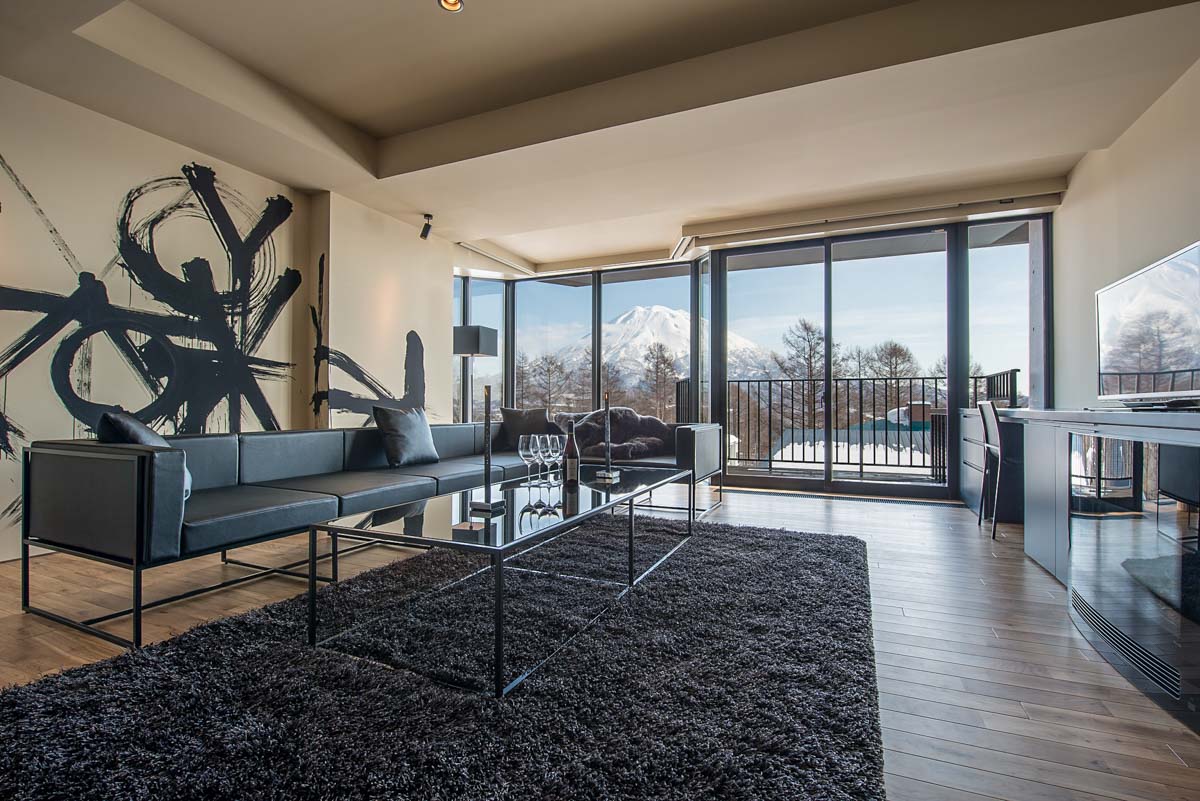 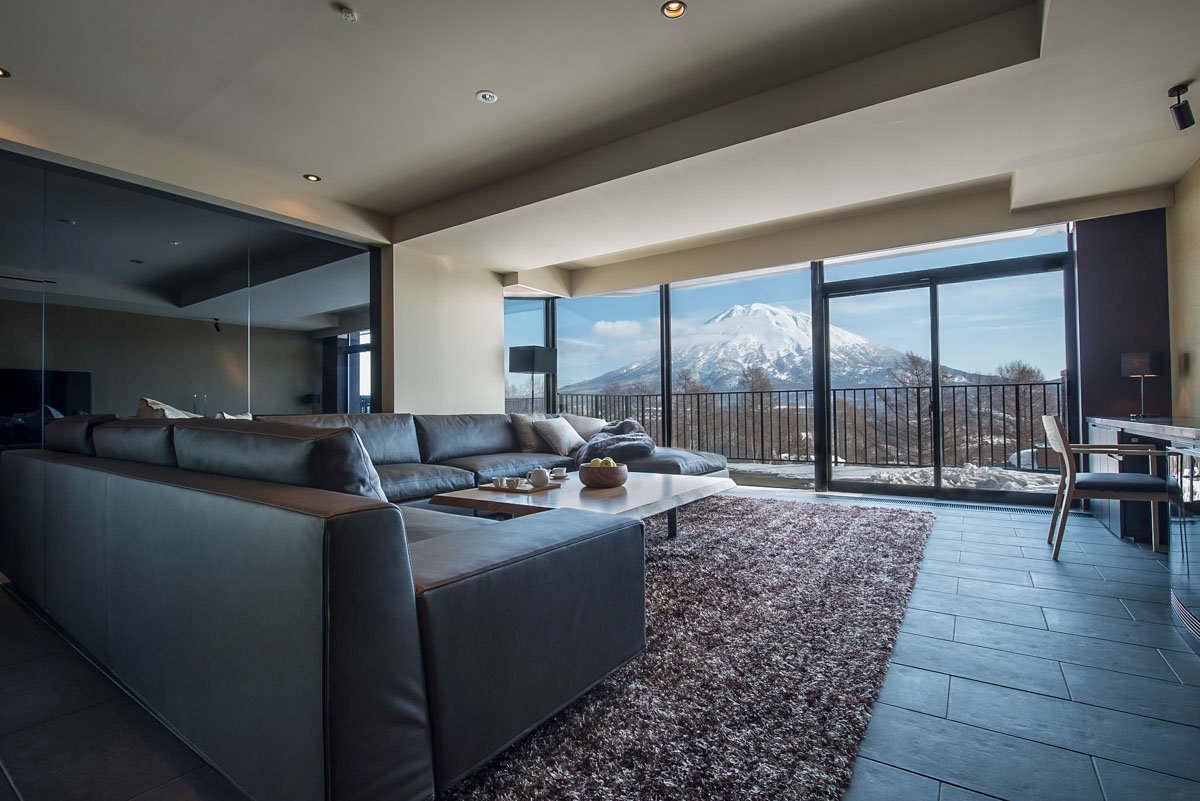 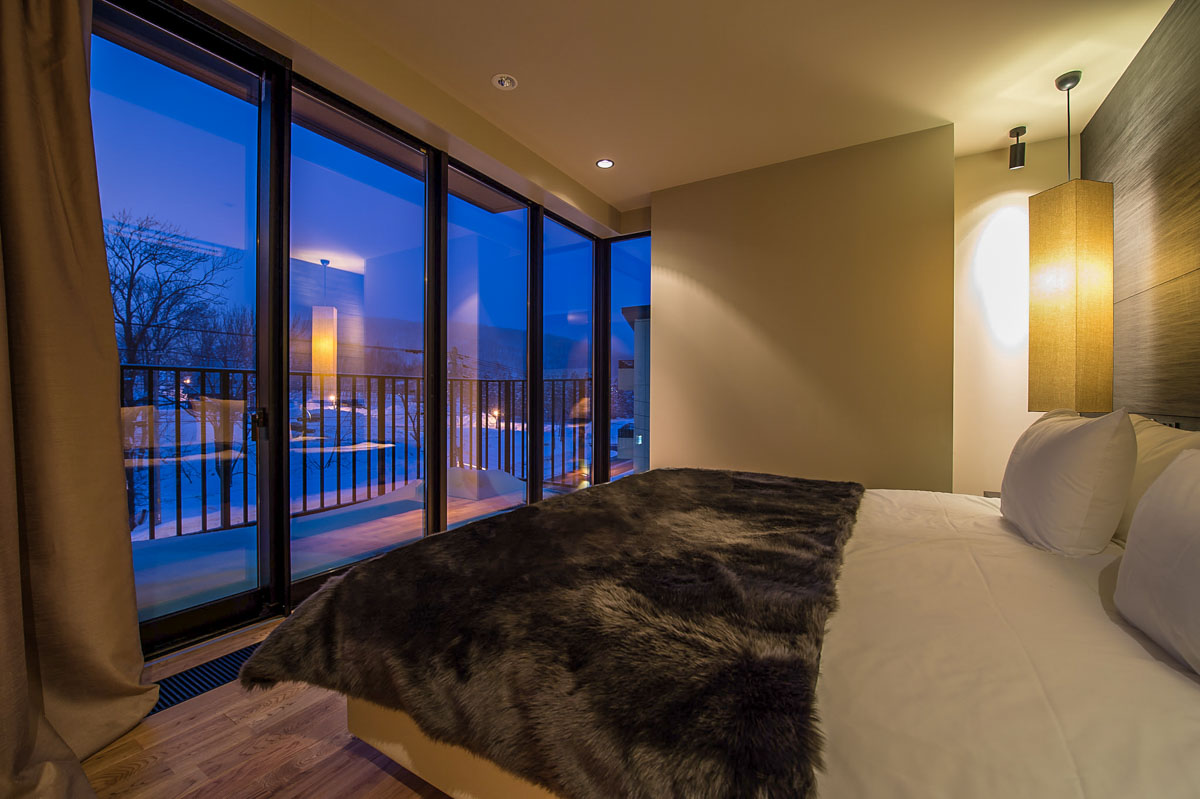 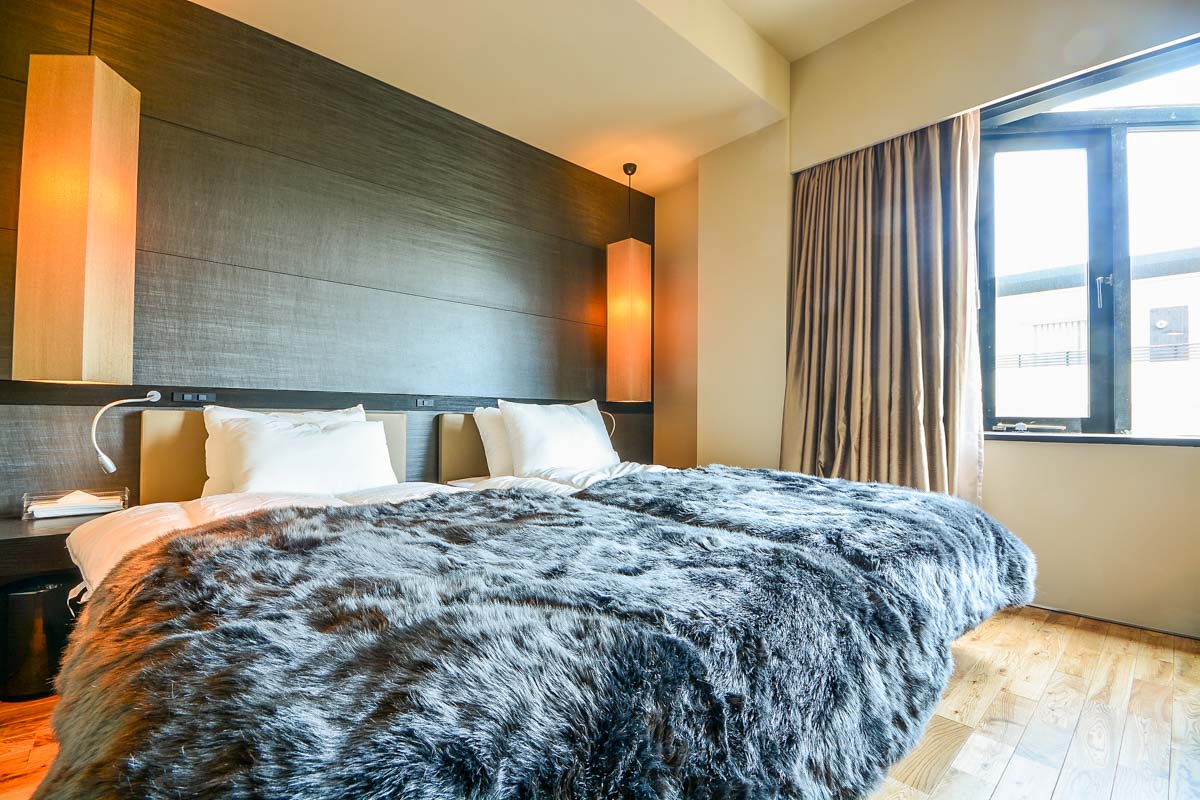 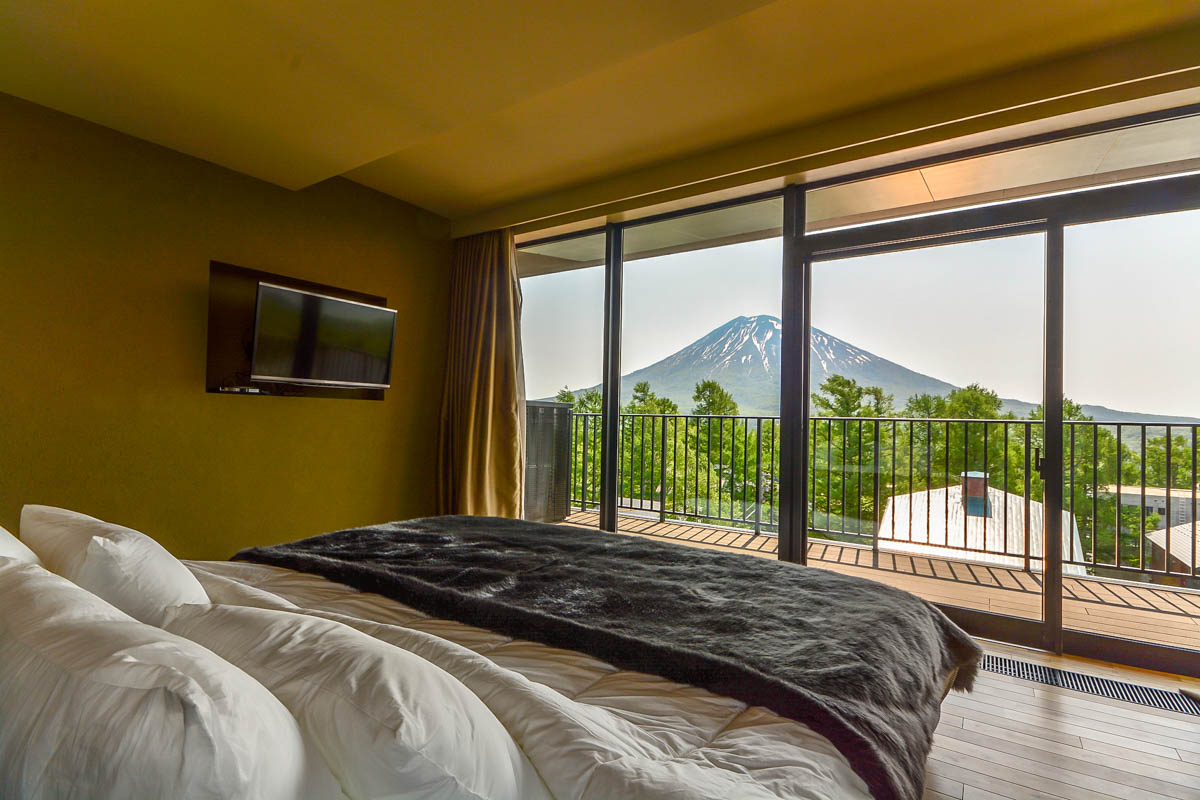 Muse Niseko is a landmark tower in central Hirafu.

Perched on the edge of the Upper Village bluff, it faces the majestic volcano Mt. Yotei, with panoramic views from every spacious 2, 3 and 4 bedroom apartment.

An 360 roof terrace and garden on the 7th floor is equipped for outdoor entertainment and private relaxation.

It boasts a magnificent views of the surrounding village mountainous landscape, including the ski fields on the upper side as well as the village below.

The apartments are appointed with an abundance of natural materials, with soft earth tones, rich character, and texture befitting an alpine chalet in Japan.

Terraces are not limited to apartment balconies but also include the sidewalk cafe patio serviced by North Face’s concept Japan flagship store, which occupies the first two floors of Muse on Hirafu Boulevard.

The ski and boot room can be entered directly from outside by skiers with granted security access.

The lobby gallery leads to a dedicated resident elevator, with several apartments, including the penthouses having private elevator access directly into the residences.

Located on the main street splitting the Upper and Lower village, Muse is within touching distance of everything in Hirafu. It boasts immediate access to a variety of restaurants, bars, retail stores, and is a short 5 minute stroll to the Ace Family Chairlift.

This 2 bedroom penthouse apartment has 2 en suite bathrooms with a large bath tub off the master bedroom en suite. The apartment has private elevator access as well as exclusive access to the roof terrace in the summer months. The views from the apartment are spectacular.

These 4 bedroom apartments are on the fourth floor. All the bedrooms have en suite bathrooms with two in each apartment offering bath tubs to help soothe tired muscles. The apartment has all the modern conveniences you expect in a building of MUSE’s quality with a teppanyaki cook top, wine fridge, large flat screen TV and designer leather lounges. With several viewing corridors you will be able to spot both Mt Yotei and the Grand Hirafu ski hill.

This is a 3 bedroom apartment on the fourth floor. All the bedrooms have en suite bathrooms and there is an spacious dining and living area. The apartment offers great views towards Mt Yotei and the Grand Hirafu ski hill.

The studio apartment is located on the fourth floor and features a separate bathroom. The apartment is well furnished and offers a comfortable retreat after a day outdoors. Views from the apartment are towards the Hirafu village and ski hill.

This is a large 3 bedroom apartment on the third floor. The en suite bathroom offers a full sized bath tub to help soothe those tired muscles. The spacious living area provides famed Mt. Yotei views from the designer leather lounges.

This is a spacious 2 bedroom apartment on the second floor with 2 en suite bathrooms for maximum convenience. Its living room and balcony face Mt Yotei.

This 1 bedroom apartment is located on the third floor. The living room and balcony face Mt. Yotei for lovely views. The unique layout of this apartment, with its sliding bedroom walls, offers privacy in the evening and a spacious living area during the day.

This 1 bedroom apartment is located on the second floor, with the same layout as 302.

The studio apartment is located on the third floor and features a separate bathroom. The apartment is well furnished and offers a comfortable retreat after a day outdoors. Views from the apartment are towards the Hirafu village and ski hill.

A world-class ski destination, Niseko receives 14m of snow per season on average. Offering 38 lifts, 4 developed, inter-linked resorts, 47km of groomed slopes, 1000m of vertical, and the longest run stretching 5600m, Niseko is the largest of Hokkaido’s ski areas, and overall the most well-rounded winter resort on the island.

There is a good mix of groomed runs for all levels, from first-timers through expert powder hounds. There is also a terrain park with half-pipes, table tops, round quarters and rails etc… a variety of terrain to suit boarders of different abilities.

That being said, novices going down the slope for the first time may want to avoid the crowds in peak powder season and consider some of the quieter times (spring).

Rates vary according to seasonality. Contact us to discuss your holiday needs.

Save a trip to the ski shop and enjoy a custom fitting session in the comfort of your accommodation!

Send us your measurements in advance and a select range of gear, plus accessories such as gloves, goggles and masks will be brought to your home to try on.

Just leave the equipment at home after your stay – we will return it for you.

For parents, a family vacation can sometimes feel like no vacation. Finding holiday babysitters in Niseko can be a challenge, until Niseko Kids Club gets it sorted with its network of English-speaking childcare professionals that serve various location in Niseko, from Hirafu to Moiwa.

・Daycare – international daycare center with 2 convenient locations: at the base of the Hirafu family chair lift, inside AYA Niseko and at the base of Hanazono, inside Hanazono 308 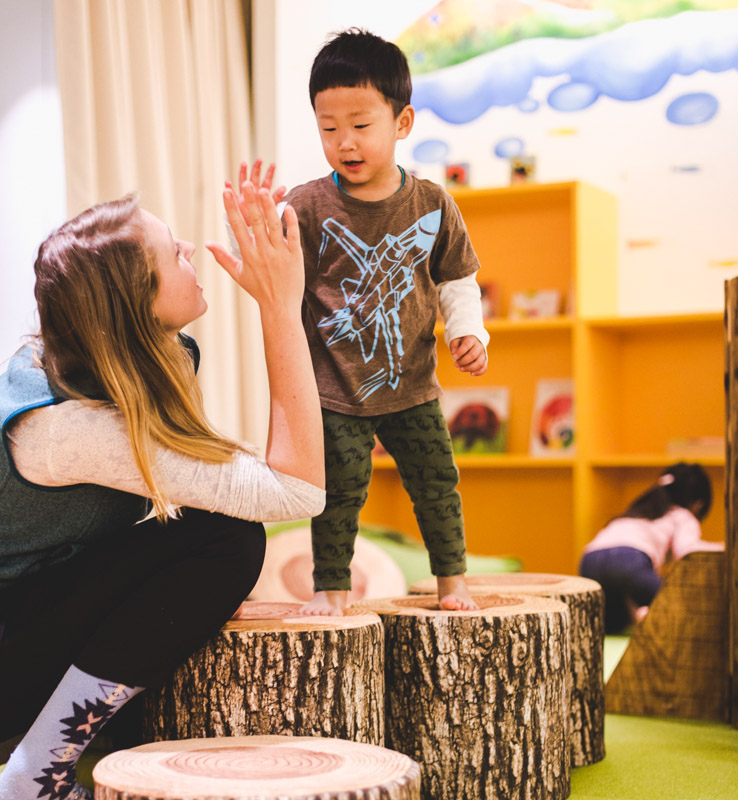 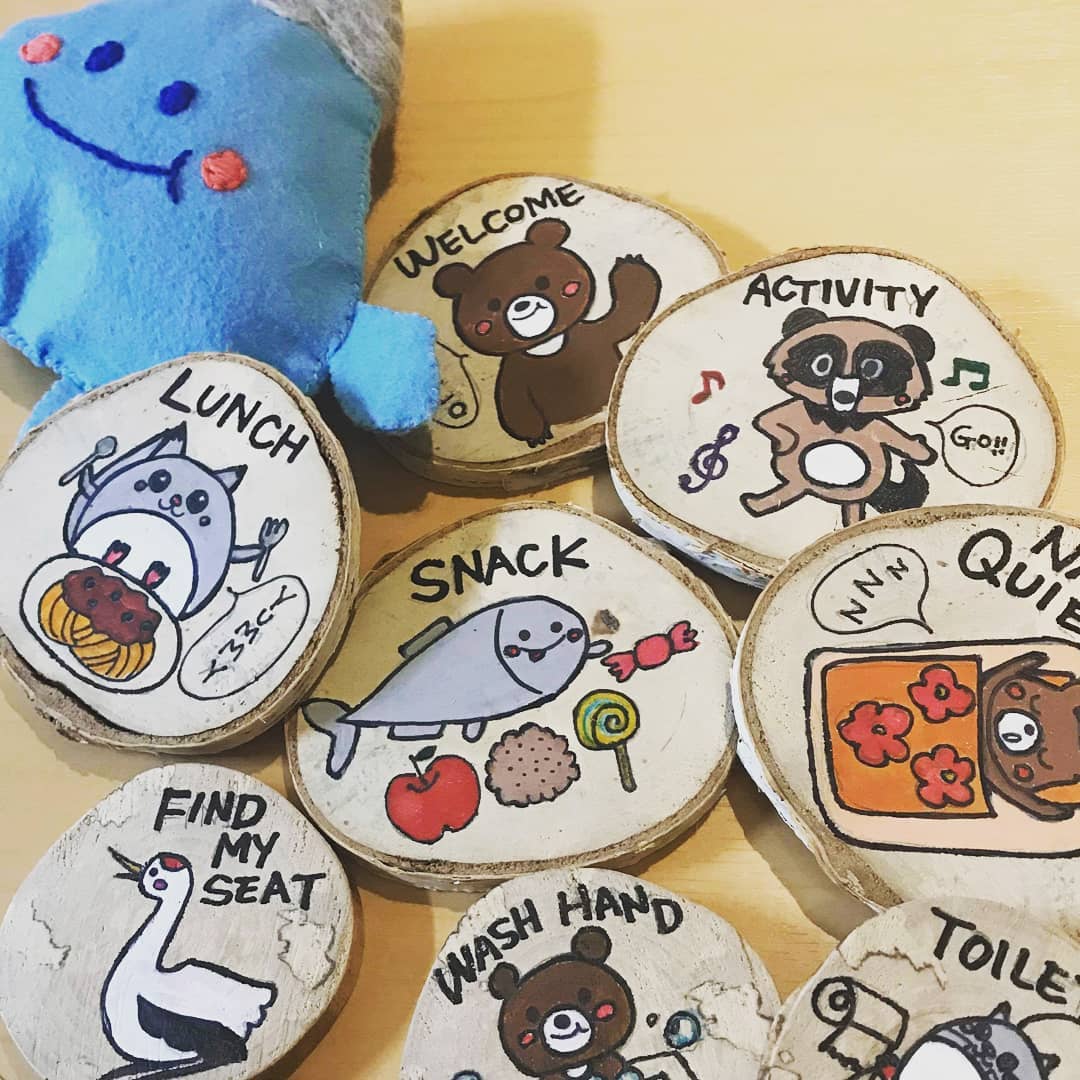 A private chef may be booked in advance for a unique in-house dining experience, or a hamper can be ordered for delivery.

It is not possible to drive in Japan with just your driving licence issued in your home country. Japan only recognises International Driving Permits based on the 1949 Geneva Convention. Before arriving in Japan you must obtain your International Driving Permit from the national Automobile Association in the country which issued your licence. If you are unsure if you hold the correct license, please contact your authority for further information.

Planning your holiday, we are with you every step along the way.

If the chalet of your choice is already booked, our team is happy to suggest equivalent alternatives and take care of the details. You can expect your vacation to be personalized to suit your tastes.

We make arrangements for these pre-arrival logistics for you:

The drive is between 2–3 hours from New Chitose Airport to Niseko.

Your driver will meet you at the airport arrival gate and then drive you the 2.5 – 3 hours to Hirafu and drop you at the door of your accommodation. You will be greeted and checked in by a dedicated staff, who be on stand by to provide handy tourist information about the Hirafu ski resort and your chalet. Rates vary depending on group number and vehicle used. Get in touch for details.

– Limousine service
If you are looking for a luxury way of traveling, you can also choose a limousine service. The 6-7 seater vehicle can be likened to a private jet, with luxurious white leather reclining armchairs, full cabin attendance and complimentary refreshments. The passenger area is fully equipped with a toilet, refrigerator, television, CD and DVD.

Private catered meals in the privacy of the chalet can be arranged, with the choice of:
Japanese/international breakfasts
Japanese dinners featuring sushi and sukiyaki
International dinners

You should definitely book your rentals in advance to ensure your ideal rental equipment is available. Peak season is extremely busy and rentals can sell out quickly.

We recommend ski and snowboard packages from GoSnow, Rhythme Snow Sports and Niseko Base Snowsports, both with rental outlet located conveniently approximate to lifts.

We highly recommend booking your lessons before the trip – Lessons book out months in advance for peak season, and even during the quieter periods you should pre-book so that the lesson can fit in smoothly to your holiday schedule.

NOT WHAT YOU ARE LOOKING FOR? TRY YOUR SEARCH AGAIN